Do you know what is default SFTP Port Number? This article will inform you about this and what is an SFTP Port. Today, the internet has become more prone to threats and hacker attacks, thus making it challenging to transfer crucial data. It reduces the risks and has made it more accessible for people to transmit high-end and critical data from one server to another. Several protocols ensure secured file transfer; one commonly used protocol is SFTP, also popularly known as SSH file transfer protocol. You can use its GUI wizard to transmit or execute command-line SFTP commands to serve the same purpose.

In this article, we will focus on what SFTP (client/server) is, how it works, its features, advantages and disadvantages, how it differs from FTP, how to change the default SFTP port number, and some commonly used SFTP client software. Not only this, we will cover some of the frequently used SFTP commands that will help you to transfer data without actually logging into the server manually.

What is SFTP? [Definition]

SFTP is an acronym for Secure file transfer protocol or SSH FTP. This protocol is used at the network layer to securely access, manage the files and transmit the data within the network. It allows two users to share data within a client-server architecture securely.

The data connection used for transmission should be protected with appropriate authentication standards and passwords.

The SFTP default port number is 22; while establishing a secured connection between the client and the server. But if you want to change the port settings to another port number, you can change the default settings accordingly. We will see the sites later in this article.

SSH-2 version is incorporated into the SFTP, ensuring an encrypted and secured transport layer where the user can run the SFTP commands to transfer the data.

It is used on both the client and server sides, and we also need to understand them. It works much faster than the simple file transfer protocol because it is a packet-based protocol. Also, with SFTP, the mainstream connection is used to transmit the data, thus not requiring a separate connection as required in FTP for file transfer.

What is SFTP Server?

The secure file transfer protocol is based on the client-server architecture, which will require one client program and one server software.

To set up the SFTP server connection, the user will require a web server with proper Internet support with SFTP port 22, essential for your system’s secure file transfer protocol server.

When you install the SFTP server software on your system, it will generate the host's SSH key, allowing the user to create and grant permissions to the other users and groups to access the system for transferring the data. The SFTP is supported by all operating systems, such as Windows, Linux, Mac OSX, and another operating systems.

The SFTP client can be a graphical interface or command-line software allowing you to connect to the SFTP server and perform various tasks. Using this software, the user can connect, authenticate, and transmit the data securely within an encrypted network. By default, the SFTP server will have a port number of 22.

You can consider the below image showing the SSH session for communicating and exchanging data between the server and the client. 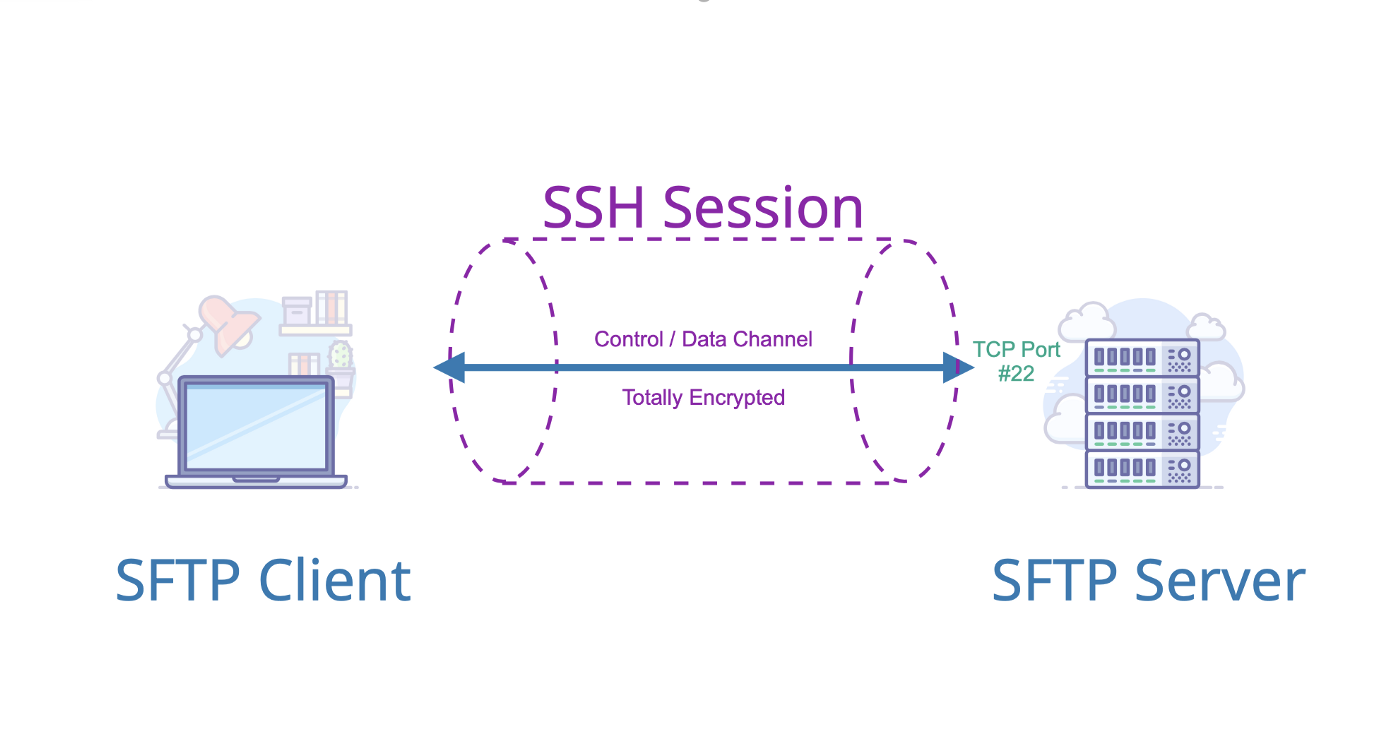 But, before you connect to the SFTP server via the SFTP client, you need to configure the following settings on the desktop for your SFTP client.

Suppose you establish the connection to a specific server for the first time. In that case, the server will generate a host key and provide it for transfer to the client to authenticate the connection. After that, whenever you connect to that server, the connection will establish without confirmation.

How does SFTP work?

SFTP uses TCP, a connection-oriented protocol allowing both devices to verify the connection before sending or receiving the files over the network. TCP ensures this using the three-way handshaking process. This process requires two systems: one sends the data, and the other receives the data.

Step 1: The sending device starts by sending an SYN message.

Step 2: After that, the receiver will acknowledge that message back to the sender.

Step 3: The sender device will again send an acknowledgment received message to the receiver.

Step 2: Both devices agree on the session key to encrypt and decrypt the data. The key is randomly generated.

Step 3: The server will use the SSH key pair to authenticate the client. The critical pair combines the public key (known to both parties) and the private key (known to the right client).

Check here to fix the SSL handshake failed error if you get an error message.

Features of SFTP and its Capabilities

Below are the benefits of SFTP.

Implementing SFTP within your organization has several advantages to securing your data transmission.

Using SFTP is not all about its advantages; you also have to face some limitations while using SFTP. Below are some that you must consider.

Difference Between FTP And SFTP

By default, the value of the SFTP port number is 22. But, changing this default value to another will make it difficult for hackers to hack your data transmission and reduce the risk. You can go through the following steps to change the port number.

In a Linux machine, you cannot use port numbers below 1024, as they are reserved for well-known services. You can use a port number within the range of 1-1024 for the SSH service, but it is recommended to choose a value above 1024.

The below example uses the value 4433 for the SFTP port. You can choose any other number if 4433 is already taken.

But before you change the SFTP port number, open a new port in your firewall. If you are using a UFW firewall, you can use the following command to open a new port.

You also have to adjust the SELinux rules to add a new SSH port using the below command for the CentOS machine.

The SSH server configuration file is stored in the /etc/ssh/sshd_config file. To make changes, you need to open the file with your text editor:

Then look for port 22. Remove the # from the beginning and enter the new SSH port number, as shown below.

In CentOS, the SSH service is named SSHD. Follow the below-listed centos command.

Step 5: Verify that the SSH daemon is listening on the new port:

There are several SFTP client tools that you can use to connect to the remote SSH server securely and perform various tasks, such as copying, deleting, pasting, uploading, and downloading files. For your reference, we have mentioned some of the commonly used SFTP clients below.

Filezilla is a free and GUI-based FTP client software. You can use this software on various operating systems, such as Windows, Linux, and Mac OS, but the server is only compatible with Windows. It comes with FTP, SFTP, and IPv6 protocols. You can pause and resume the file transfer as per the requirement. It comes with the drag and drops feature for quick uploading and downloading files.

Windows Secure Copy (WinSCP) is a free SFTP and FTP client for Windows operating system. You can simply use this software to transfer the files between the host computer and the remote server. Like FileZilla, WinSCP also has drag-and-drop features for quickly uploading and downloading files. You can integrate this software with the PuTTY authentication agent to support SSH.

It is another free and open-source FTP client for securely transferring files via FTP, SFTP, and FTPS. It lets you connect to multiple servers simultaneously to transfer files and thus handle multiple processes using a single instance. It helps synchronize the folders automatically and schedule file transfers within the allocated time.

SFTP has secured all communication across the network. It adds another security level by authenticating the credentials of the logging client or using SSH keys. Understanding the needs of the SFTP is essential for the business dealing with transmitting critical and personal data. Implementing and setting SFTP requires technical knowledge and command-line commands.

In this article, you have received a lot of information about the default SFTP port number, what the SFTP port is, and how to change the default SFTP port number. Also, you can easily choose from the most commonly used SFTP clients to establish a secure connection to the SSH remote server and perform tasks accordingly. We have also given you a little information about the best SFTP client software available in the market; if you have any other suggestions about the SFTP port number, you can comment in the comment box. We also offer SSH servers you can buy them from MonoVM.