There are various types of OS available in the market that you can choose as per your business requirement. Operating systems has shown tremendous evolution over time and now can fulfil every need of any user. Read along to find out more! You cannot directly communicate with the hardware of the systems. For that, we require software that will convert our instructions to the machine language understood by hardware. This is where the operating system comes into action. Every device, such as computers, mobile phones, comes with an operating system that is the engine behind the proper functioning of these devices. The operating system can handle various tasks simultaneously without impacting the performance of your devices.

There are various benefits of having an operating system on your devices. Nowadays, you will come across multiple operating systems available in the market that can be chosen as per your requirement. Before that, we will discuss the basic definition of the operating system, its functions, and various types.

What is the operating system?

An operating system is a software, acting as an intermediate between the hardware and the user using the system. It manages every resource available on the system among hardware and software. The operating system provides a platform to run various applications or programs efficiently without impacting the working of each other.

The conceptual view of the operating system is shown below. 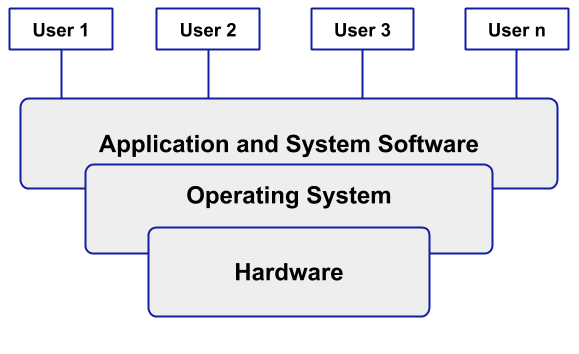 Essential functions of an Operating System

Following are the basic functionalities of the operating system that helps in managing the entire system effectively.

The operating systems have evolved as per the changing requirement of the businesses. Here, we list the various types of OS available and used.

This type of OS groups similar jobs into batches using some operators. You can execute these batches one by one, for example. Suppose we have several programs in C++ and Java. If we run these programs one by one, we need to load the compiler each time. Instead of doing that, we will group all the C++ programs and Java programs in another batch. Then for the C++ batch, we have to load the compiler only once, and the same goes with the Java programs.

Each system has its CPU, memory, and resources in this type of OS. All systems on the network are connected via a shared communication network. In this type of OS, one system can access the data of another system via remote access. Distributed systems have central processors used by multiple real-time applications and users. This makes it possible to spread the data processing jobs between the processors.

This type of OS is specially designed for embedded computer systems to perform specific tasks. These OS are small, dependable, and resource-efficient. For example, the software intended for elevators can only work for that. Such type of OS has resource-constrained hardware.

This type of OS is proper when dealing with real-time data. Thus, whenever the data is available, it needs to be executed within a limited time without any delay. Real-time OS is based on the clock interrupt. So, for processing a large number of requests in a brief period, you need the Real-time Operating System.

Following are the most common operating systems that are in use. Below is the market share of the available OS. 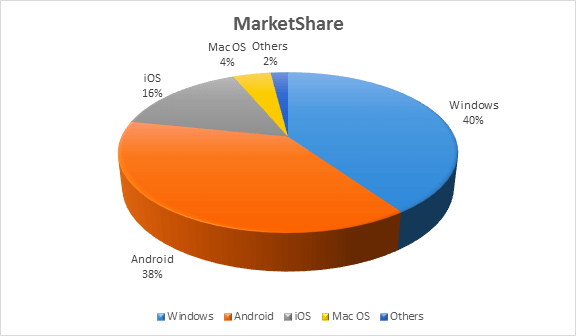 It was created by Microsoft and is one of the computers' most popular operating systems. One downside of Windows is that it might show compatibility issues with mobile phones.

Android from Google is another popular operating system used worldwide. It is used primarily on tablets and smartphones. It runs on devices that other manufacturers create. Users can access several mobile applications available on the Google Play Store.

Developed by Apple, this operating system efficiently runs on the manufacturer's personal computers and desktops.

It was created by the Finnish programmer Linus Torvalds. You can see various distributions of Linux developed by programmer collaborators across the world who submit tweaks to the central kernel software. Linux is popular among programmers and corporate servers. You can avail of it for free.

The operating system is one of the crucial parts of the computer that can handle each and every task along with the user's interaction with the hardware. Without the OS, no machine will function properly as the hardware will not directly understand the users' language. There are various types of OS available in the market that you can choose as per your business requirement. OS has shown tremendous evolution over time and now can fulfil every need of any user.