What is the Difference Between Telnet and SSH?

SSH VS Telnet, Both SSH and Telnet are networking protocols that have been widely used at some point in time. To find out more about them and the differences between them, click here. 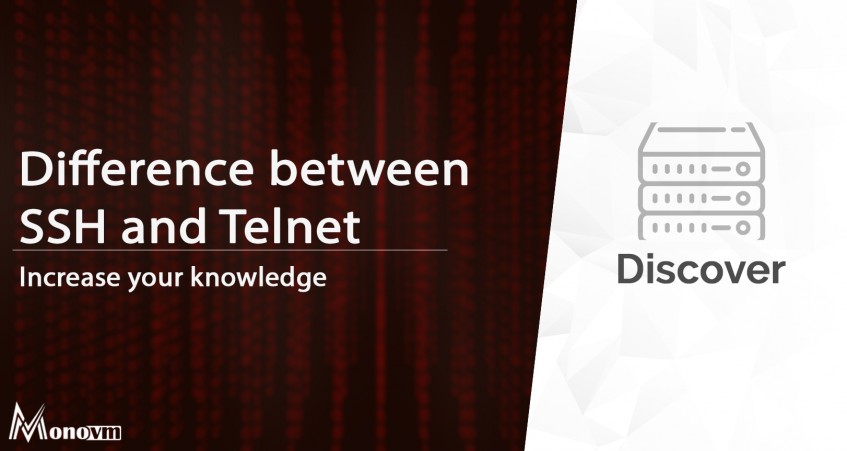 So, you got yourself a remote server and wish to access it. Well, there are multiple ways you could do so. If it is a Windows server, the most common way you would remotely control it is through Microsoft’s proprietary remote desktop protocol. If you have, however, opted for the more widely used Linux operating system on your server, this option is not available. Instead, you would use Telnet or SSH to access a remote server, the latter being the better option.

Today we will take a deep dive into the discussion about Telnet and Secure Shell protocols, their advantages, disadvantages, and differences between them. Lastly, we will follow up with some advice on which protocol you should pick when accessing a remote server.

What is the Difference Between Telnet and SSH

Both Telnet and Secure Shell (i.e. SSH) are network protocols used to connect to remote servers and both have been used widely at different points in time. Telnet is the original protocol that was used when the internet was first launched in 1969. It was developed to be used in private networks and has no security measures, making it irrelevant when used on public networks. This is the main reason why SSH was developed as a replacement for Telnet. We will discuss the differences between telnet and SSH, however, let's first understand what each one is.

Telnet is a remote protocol that allows a user to communicate with a remote device. It is an abbreviation for Terminal Network, Telecommunication Network, or Teletype network, depending on the source. It was originally built to be a form of remote control to manage mainframe computers from distant terminals. Telnet is a text-based computer protocol, meaning it does not contain a GUI (i.e. Graphical User Interface). The three types of basic services that Telnet offers are:

Due to the lack of security measures, Telnet has been almost completely replaced by SSH in nearly all usage scenarios.

Secure Shell is a network protocol that gives users a secure way to access a computer over an unsecured network. It provides several alternative options for strong authentication, and it protects the communication's security and integrity with strong encryption. Unlike Telnet, once an SSH connection is established, the data that is transmitted is encrypted according to the parameters negotiated in the setup in accordance with industry-standard strong encryption algorithms (e.g. Advanced Encryption Standard). During this stage, the client and the server both agree on the symmetric encryption algorithm to be used and generate the encryption key. The typical uses of the SSH protocol:

Key Differences Between Telnet and SSH 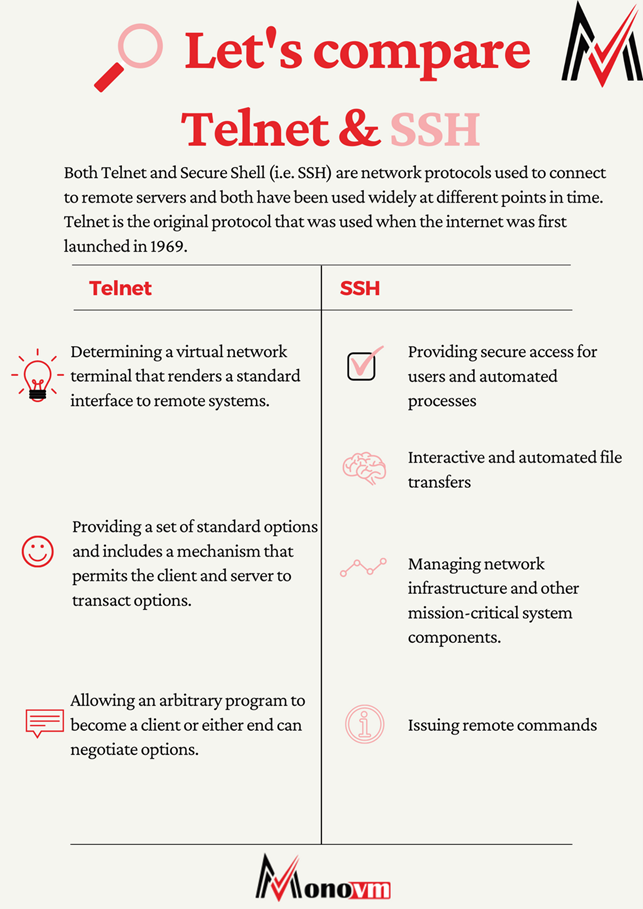 Even though both protocols serve the same purpose, Telnet is a conventional protocol whereas SSH is the replacement for Telnet, also providing some enhanced features.

Telnet transmits all data in plain text format (yes, even passwords), allowing for anyone on the network to be able to intercept the traffic and effortlessly access it. As one can imagine, this is a tremendous security risk and is the primary reason why Telnet is nearly extinct today.

SSH, on the other hand, uses encryption for all transmitted layers, making security breaches less likely to occur and allowing it to withstand eavesdropping, man-in-the-middle, and insertion/replay attacks.

Here is a guide on how you can log in to a Linux VPS server With SSH.

While both Telnet and SSH can be used to transmit data to remote servers, it is not only highly recommended to use the latter, but also has become a standard industry practice to do so. Nevertheless, we are not here to instruct you on what to do, thus we explained both network protocols and listed their upsides & shortcomings. Instead, we are here to inform you to the best of our abilities on which one will be more useful to you.