How to Print in Python? Use of print function

Do you know how to print in Python? What is Python Print Function? How to use Print Function. This article will guide you with all the relevant information about this. Python is one of the most significantly used programming languages, from web development to machine learning. Due to its excellent online documentation, people often use it for web-based development. You can use its easy-to-understand syntax, making it commonly used among beginners. Several commands and syntaxes are available in Python to make your complex job easier. This article focuses on the print() syntax, the print function in python, and how python print function works. We have mentioned several scenarios with examples for better understanding.

Why use print in Python?

Learning to print in Python should be the top priority to make your Python learning journey smoother. Python has a print() function for displaying the output to the console. The text could be a descriptive message, computational result, or error message for a more straightforward debugging process. The print function and its syntax may vary from python version to version.

If you are using Python2, you only have to use the print keyword on the console. For example,

If you are using Python3, you must use the print() function below.

You will get the error message below if you forget to use the opening and closing parenthesis while using the print() function.

The only difference in the print syntax in Python 2 and Python3 is that Python2 has print statements while Python3 has a print function.

There is no return value for the print() function.

The print will display an empty line to the console without any parameters. If you do not pass any object or argument for the print function, you still have to include the parenthesis set for its working, and else you will end up in an error message. You can make it evident if you are using the Python REPL (Read Eval Print Loop).

To start a new session after installing the Python3, you type exit() to end the session. It works similarly to hitting the enter key, creating a new line, and moving the cursor to the new line. The python print() function works similarly without any parameters and displays an empty line on the console.

Also, you can use variables to store the string literal and pass that variable name as an argument to the print() function.

In such a way, you can provide the meaningful names of the variables as per the stored content. It improves the reliability of the code and allows other developers to understand the code better.

As we have mentioned above, you can pass more than one object within the print() function. You can pass several parameters separated by a comma, as shown below.

You can also use the concatenation with the addition operator shown below to get the same result.

While using concatenation, you need to take care of the spaces, or else you will end up with the wrong output, as shown below.

Also, ensure you cannot use the literal string with the number; otherwise, you will get the error message below.

If you still want to concatenate the string literal to a number, you need to convert it to a string literal while passing them as an argument. For example.

You can go for the modern printing of the objects by using an f-string, as shown below.

The type of argument is limited to the strings. You can also pass objects with another data type. You can use all data types with the print() function.

As mentioned earlier, sep determines the separator type in the print () function. By default, this parameter’s value is spaces. You need to provide some value explicitly to the sep parameter to change the default value, as shown below.

Also you can even remove the spaces by simply providing the empty string, as shown below.

How to Remove Default newline Character

Suppose you call the two print functions separately, one after the other. In the below example, you will see that the second call is displayed on a new line, as shown below. 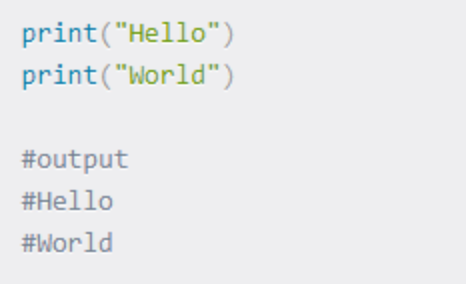 To change the default value of the “end” parameter, you can provide the value explicitly and change it to an empty string, as shown below.

You can also change it to a complete stop, as shown below.

How to Direct Output to the File

Many people want to print the output of their command on the console, but sometimes it is required that the output of any command will be directed to a file. Make sure that the file to which you want to add the text should be an existing one.

Suppose you have an existing text file on which you want to use the print() function to add some text. You need to open and write to a file to add the text. For that, you will require the open() function. You can pass the file name as the parameter along with the (-w) mode for specifying the write mode.

Every time you run your code, the file’s contents will get deleted and replaced by new text. If you want to keep the existing text, you can use the (-a) mode for adding the text to the end of the existing one.

As shown below, you can add any text to the file and set its parameter to the placeholder name you created for the file.

This article explains how Python print() function and Python print statements work. It is a commonly used command to print the output to the console. This command comes with several parameters with their default values. You need to provide explicit values and check the differences yourself to change those values.

We have mentioned different scenarios and examples for your understanding. Happy coding!