What is an Operating System?

With this article, you will get to know the advantages, disadvantages, and functions of an OS. Various OS is available in the market, such as Windows, Linux, Unix and Unix-like, MacOS, etc. Read along to learn more! Today, there are several operating systems available in the market that you can choose and opt for working. In this article, we will be discussing the operating system in detail, along with its features, advantages, and disadvantages.

What is an operating system?

An operating system is considered a program or software that helps manage the seamless execution of the applications and act as an interface for all the users and the underlying hardware of the computer. Also, you can say that an OS is a single program capable of running various programs all the time without any issue and allocate system resources such as memory, services, processors, devices, and others for the easy execution of these applications.

Late 1950 began the introduction of the operating system when the first OS was developed to manage tape storage. The General Motors research lab implemented the first OS in 1950 for handling the IBM 701. During 1960, disks were being used by the operating systems. Then later, in 1960, the first version of the Unix OS was launched and came into the market. Microsoft created their first OS- DOS in 1981 on top of the 86-DOS software.

Below is the list of various types of operating systems available.

Some processes can be time-consuming and require most of the computer resources. Therefore, the operations with the exact needs are batched together to be run together. The user who creates the batch processing system will not be able to interact with the computer directly. For this type of OS, the user have to prepare the group of the processes on the offline device and then provide it to the computer operator to execute.

This type of operating system allows users to work on a single computer system even though they are located at different terminals. All they can work at the same time. In this case, the CPU is shared among multiple users and is known as time-sharing.

This type of operating system depends on processors distributed across the network at different locations and in multiple machines. This will help provide fast computations to their users working on those systems.

These operating systems run on the server, making them capable of handling network data, users, groups, and other functionalities.

These are the OS designed for powering smartphones, tablets, and other mobile devices.

Below are the essential characteristics of any operating system.

Functions of the operating system

Below are the core functions of an operating system.

Process management means the capability of the operating system to manage all the running processes within the system. It will include various tasks like scheduling, ending a process, and others. Whenever more than one process is running, it is the core responsibility of the OS to schedule the CPU to complete all the tasks simultaneously.

An operating system uses the file system mechanism for managing the system's storage. Some commonly used filesystems are- NIFS, CFS, CIFS, NFS, and others. The storage manager is capable of handling all the data stored within the various tracks of the hard disk, including the hard disk.

From the operating system perspective, privacy refers to the passwords that are being set for the system so that only people having authorized access can access the programs and data stored within the system.

Below are all the advantages of working on an operating system.

Below are some disadvantages that you may face working on an operating system.

What is Kernel in Operating System?

The kernel is a core component of any operating system. As an operating system, a kernel is also an interface that helps manage the communication between the software and the hardware. The kernel helps in the low-level scheduling of all the processes running on the top of the system. It synchronizes every process and manages the resources appropriately to work correctly. 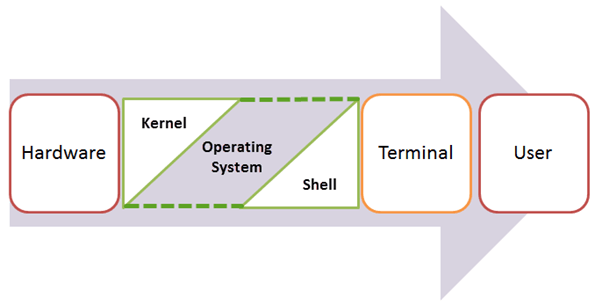 With an operating system, you will not be able to leverage the benefits of a computer. You will not get to use the available applications with the operating system. It acts as an interface between the user and the hardware for carrying out various tasks simultaneously. Even the OS is responsible for handling the execution of multiple tasks simultaneously, so they will not interact with each other's work. An OS will keep track of all the system resources allocated for the seamless working of the programs and applications.

Various OS is available in the market, such as Windows, Linux, Unix and Unix-like, MacOS, etc. An OS has made out lives simpler since the 1950s that led to the introduction of the first OS. After that, a tremendous evolution of OS has been seen with various functionalities.

With this article, you will get to know the advantages, disadvantages, and functions of an OS. However, this is not the end of OS; the field is so vast. We have only shared the basic understanding of what an OS is and how it works.