What is the CLI? [Command Line Interface]

We have all gotten accustomed to the Graphical User Interface (GUI) with operating systems that we use daily, such as Windows and macOS. When you take the leap going into the profession of IT or web hosting, however, the landscape changes. You will see that the majority of IT professionals prefer to control servers and PCs using the Command Line Interface (CLI). Read on to find out. 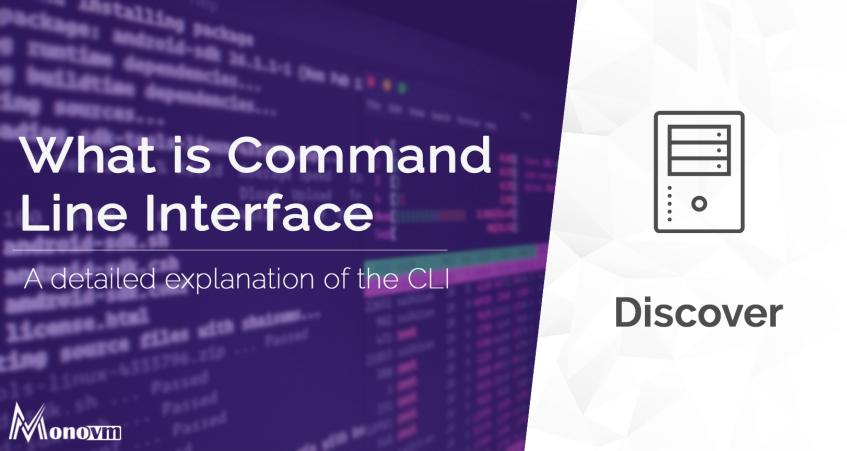 The full form of CLI is Command Line Interface. It is a tool that allows computer users to manage and monitor their system files using some commands. This user interface can be called a command-line UI which is text-based and easy to operate. Command Line interface is available in both Linux and Windows systems though we use it mostly in the Ubuntu computers to manage files.

However, CLI is not similar to GUI or graphical interface and there are many differences between these two. GUI is used mostly in the latest operating systems due to its graphical interfaces. But CLI is for everyone. In this post, we are going to learn about what CLI is and how it helps computer users, and a lot more.

What is the CLI?

CLI is a powerful tool that runs with the help of commands. You put commands from your keyboard to tell the system what to do. And based on your commands, your computer performs specific tasks. Although CLI is so powerful, beginners hardly use it. Some people think that CLI is a tool for advanced users while in most cases, it can be used by a beginner as well. You just have to learn its functions and use cases. We will tell you more about the Command-line interface but let’s find out about its history first.

The History of Command-Line Interface

Before the mouse was not that popular and users had to use the keyboard every time they wanted their PC to work according to their requirements. They simply ran commands on the CLI through the keyboard and the computer would work according to the commands. The commands differ from actions to results. For example, if you want your computer to do a specific task, you will have to use different commands. But if you want your computer to show a result or a specific task, you will use another set of commands.

However, you should be careful while typing the commands because using the wrong commands can create a different result such as deleting your files. That’s why many users don’t feel comfortable using the CLI, knowing that the commands should be correct before they are applied. That’s why the mouse was invented to ease out the process of managing files and using the computer and it’s a safer alternative for computer users. Later after some years, GUI was invented too. GUI represents some buttons and menus along with the commands that make it easier to initiate a task on your system. These buttons and menus are used to represent various individual commands on your Linux computer.

These days, GUI is more popular than CLI but various computers offer the combination of both command-line tools. You can find CLI in Mac OS and the system also offers the advantages of GUI which are more practical and graphical for the users. In CLI, you can add texts to execute tasks in your system and the commands determine how your computer will function. CLI was the main command line input in the i970s and 1980s for Unix, MS-DOS, and Apple DOS systems. And even though GUI is more advanced and graphical, software developers still prefer CLI for configuring systems, installing software, and use the system administrative rights, and many other features that GUI doesn’t offer.

But CLI is not the most of the command-line interfaces in Windows, Mac OS, and Linux. In fact, if you dig deeper into the command line interface history, you will find Shell.

Shell is also a user interface that processes all the commands that you type in the command-line interface. Shell will read and interpret the commands and will guide your computer to perform the tasks you are commanding for. Shell manages the CLI and works as a bridge between the computer and its user. You can manage files and directories using shell, open and close a window, manage system processes, perform various tasks on repeat, and more. There are many types of shells but Windows shell and Bash shell are the most common ones. Windows shell as you can imagine is for Windows operating systems and bash is for Linux and Mac OS. Let’s see how these shells work by getting to know them a little better.

Windows shell is what we know as Command Prompt and its executable file is CMD.exe. Command Prompt has been used by Microsoft since MS-DOS was more popular than Windows. Opening Command Prompt in Windows is easy. You can open the run box by pressing the Windows +R buttons together and type CMD in the field and hit Enter. Alternatively, you can go to Start and then All Programs and click on Accessories then open Command Prompt.

In Windows Shell, you can type a command and it will run on the black command prompt window to perform the task for you. You can either type a single command on the CMD window or a combination of commands depending on your requirement. The commands will run in a sequence where one command will be executed after one another. With the command prompt, you can monitor and manage several things on your Windows computer including:

You are able to perform these tasks with the help of some syntaxes on your command prompt window. Here are the tasks and their syntax:

To change a directory: Use the CD [path] to go to a specific directory from the command prompt. You will have to include a space before the path such as CD C:\Program Files

To rename a file: Use the REN [drive:][path] [source] [target] command combination to rename a file within a specific folder. For example, REN d:untitled.txt untitled1.txt. The renamed file will be saved in the exact location you accessed it from.

Removing a file: Use the DEL [filename] command in the command prompt to delete a file. You can add the force deletion option before the name of the file if you want like this DEL /F untitled.txt. F stands for force deletion.

But if you are using Mac OS or Linux, your command prompt interface should be Bash and it has new commands.

Bash Shell’s full form is Bourne Again SHell that is often seen in Mac OS and Linux distributions. In case, your machine does not have the in-built bash, you can install it on your own. The most common bash shells are Tchs shell, Ksh shell, and Zsh shell that you will find in the Utilities window in your Linux distro. Gnome desktop users know the Bash shell as Terminal and KDE users know the Bash as Konsole.

Mac users know Bash as Terminal.app and you can run it from Application -> Utilities -> Terminal. Alternatively, go to Spotlight search and enter the terminal to find the program. In the terminal window, you can type a command that will consist of the command, the argument, and the options. In the command, it will be the instructions that you want to perform for a specific task and the argument will clarify where the command should work and the option will allow you to modify the output.

To know how to use bash, you need to learn a few commands to deal with the shell which we call shell scripting. The commands have two categories: one handles the tasks and the other category handles the files. Here are the tasks you can perform in Mac OS using Bash:

To change a directory: Use cd destination to move to a particular directory like this: cd ~/Desktop.

To delete a file: Use the rm filename to delete a file in a particular folder from your Bash shell. You need to go to the right folder location to ensure that you are not ending up deleting the wrong file. For example, rm untitled.rtf.

Whenever you are typing a command on either Windows shell or bash shell, notice the characters you are typing. A single slight mistake can end up dislocating the file or even remove it forever from your device. That’s why we recommend you copy the commands using Control+C and paste them in the command shell with Control+V so that there is no mistake. Do the same with the file and location names as well.

What are the Differences Between CLI and GUI?

GUI interface is the graphical interface that is more popular than CLI in today’s technology. GUI is used in the Windows menu and icons that execute commands. In GUI, the mouse is the easiest way to control the user interface but many GUIs offer navigation and execution of tasks through the keyboards of the machine. Microsoft Word is a GUI-based software where you can change layouts or execute tasks through both the mouse and keyboard as well. The best thing about GUI is it is graphical. This means you can see the features and options visually rather than having to use commands for using them.

The simplicity of GUI does not give the users as many features and options as Command-Line interfaces do. For example, you will have to do a lot of strokes of the mouse to execute a task which a simple command could do. Also, you cannot do scripting or automation of tasks with GUI and you will have to repeat each click of the mouse to perform the same task over and over.

That’s the reason why many software developers use CLI more than GUI because CLI consumes less time in the configurations and development of software. If you can take care of the commands properly, CLI will save you a lot of time and effort though it takes a little time to get used to it.

What Are the Benefits and Downsides of CLI?

Here are some of the advantages and disadvantages of CLI that you should consider:

Even though there is so much debate between CLI and GUI, CLI will always be the better interface. It’s powerful, handles tasks repeatedly, saves time, and is advanced. Even when you use GUI on your OS, you might have to use CLI in different scenarios; coding for example. And not to mention that without coding, you cannot develop proper software. You will have to memorize the commands in CLI to learn the better use of the interface. And though it’s going to take some time, when you are used to it, it will be worth it.

Therefore, you can choose to be productive and fast with CLI rather than being simple and easy with GUI.

How to use REST WordPress API
Different WordPress Alternatives
How to edit profile Information in Monovm
What is the default SSH Port?