We are used to transmitting data through regular copper wires, however they come with a great deal of disadvantages. The reason for this is that copper wires use electrical signals to transmit data, creating challenges such as signal degradation, electromagnetic interference and low bandwidth limits. At some point in the last century, the entire internet relied on copper wires for worldwide data transmission, however innovation came from a completely unexpected direction. In the 1950s, optical fibers were originally developed for use in endoscopes to help doctors see inside the human body without cutting it open. Approximately ten years later, engineers found a way to use optical fibers to transmit telephone calls at the speed of light (normally it would be around 300,000 km/s, however inside the fiber optic wire it slows down to around two thirds of that). These developments set the foundation to what is nowadays the main data transmission method over the internet, carrying over 99% of all internet, telephone communication and cable TV traffic. 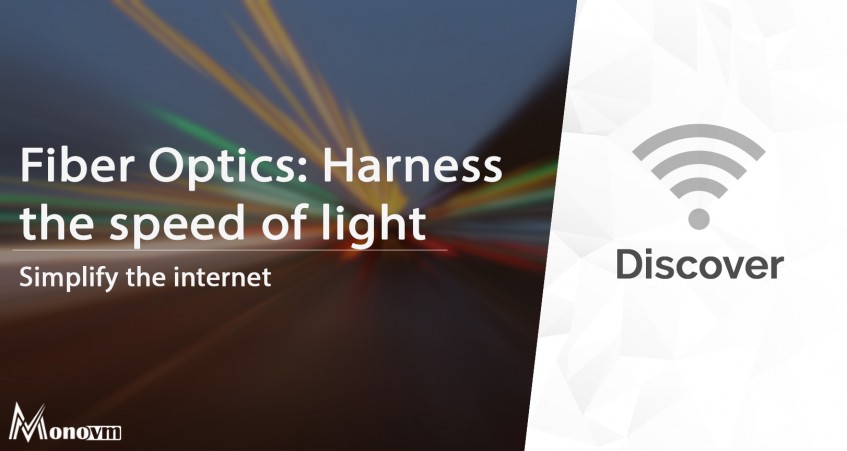 What is Fiber Optics?

A fiber-optic cable is made up of thin strands of glass or plastic known as optical fibers. A cable can have as few as two strands and could increase up to several thousand. Each single strand in the cable is about one tenth of the thickness of human hair. Fiber optic cables carry information using entirely optical technology, meaning that all the data is sent through pulses of light.

Light travels through the fiber optic cable not in a straight line, but by repeatedly bouncing off the walls of the optical fibers. Using common logic, we could conclude that light traveling through a clear glass tube would simply shine through it, however by making the light beam hit the walls of the pipe at a very shallow angle, we cause it to be reflected as if it was a mirror. This is called total internal reflection and is one of the methods used to keep the light from escaping the optical fibers.

There are two types of fiber optic cables: single-mode fiber and multi-mode fiber. Single-mode means the fiber can propagate only one type of light mode at a time. Multi-mode on the other hand, can propagate multiple light modes at the same time. They mainly differ in core diameter, bandwidth, wavelength and required light source.

Fiber optic cables have numerous advantages over traditional copper cabling. Here’s just a few of them:

What is Dark Fiber?

Although sounding sinister, it simply refers to the fiber optic cables that have been installed but are not currently in use. Extremely large quantities of fiber optic cabling have been laid since the 1980s onward, with the worldwide total being more than hundred million kilometers and some of them still lie unused today. It is generally believed that most networks contain a third to half of dark fiber.